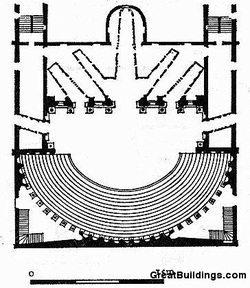 The Teatro Olimpico was designed for the Vicenza Accademia Olimpica to stage theatrical performances. Modeled by Palladio after both his studies of several ancient theaters and his own illustrations of classical theater design, made for Daniele Barbaro's translation of Vitruvius, this is a lone surviving Renaissance theater.

Inside an exterior brick box, the elaborate wooden theater interior is a half circle of steep tiers of seats (wood covered benches) facing a rectangular proscenium stage. A wooden colonnade with cornice and figures above circles the top of the seats. The ceiling plane is undifferentiated and was later painted blue, suggesting an open sky above the theater.

The walls and ceiling of the proscenium are elaborately articulated with architectural details and statues, made of wood and plaster. A central arched opening dominates the back wall, flanked by two smaller doorways. Through these openings, elaborate stage sets of streets angle backstage, a triad through the central opening and single streets through each side. These sets, designed later by Scamozzi, use techniques of tilting the floors and contracting the angle between the street walls and the heights of their building facades to make foreshortened streets in perspective. 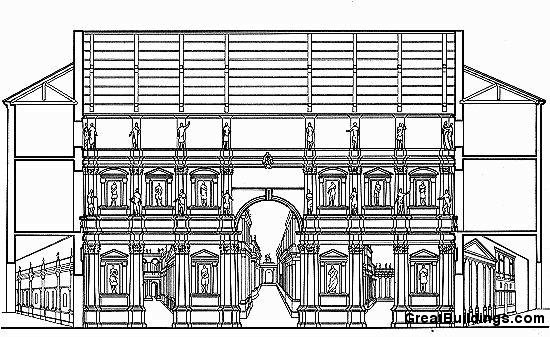 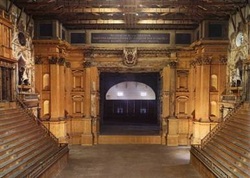 The 3000 seat Teatro Farnese, the first permanent proscenium theatre, was built into the Great Hall of the Palazzo della Pilotta in Parma for the 1618 visit of Cosimo II de' Medici. Because the visit was canceled, the first presentation on the stage, Monteverdi's Mercurio e Marte, was not given until December 1628. The theatre was used, primarily for offical state functions (such as a Royal wedding), for 104 years before being abandoned. The palazzo was almost completely destroyed by Allied bombs during World War II (1944). It was rebuilt, following Giovanni Battista Aleotti's (1546-1636) original plans in the 1950 and reopened in 1962. See the photograph of the Teatro Farnese auditorium bellow. 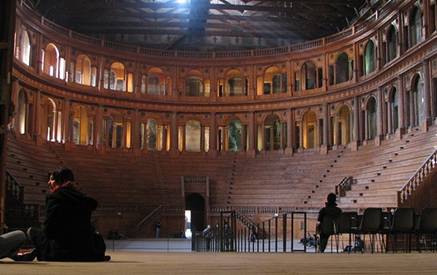