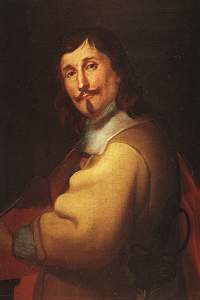 Giacomo Torelli  was an Italian stage designer, engineer, and architect. His work in stage design, particularly his designs of machinery for creating spectacular scenery changes and other special effects, was extensively engraved and hence survives as the most complete record of mid-to-late seventeenth century set design. Nothing is known of Torelli’s early life. In 1641 he was a military engineer at Venice. Already known as an architect, he built two churches there. Having erected the Teatro Novissimo at Venice, he furnished it with ingenious machines, including a revolving stage and the chariot-and-pole system for changing scenery. His inventions amazed 17th-century Europe and earned for him the title il gran stregone (“the great wizard”). He was called to France about 1645. There Torelli equipped the Théâtre du Petit-Bourbon in Paris with numerous devices such as the first effective machinery for rapid changes of heavy sets, which greatly encouraged the development of elaborate stage effects. Among his triumphs in Paris was the operatic production of Andromède (1650) by Pierre Corneille. Torelli later returned to Italy (c. 1662) and built an elaborately equipped theatre at Fano. His successor at the Petit-Bourbon, Gaspare Vigarani, destroyed his sets, apparently out of jealousy, but the designs for them were reproduced in the Encyclopédie (1751–72) of French philosopher Denis Diderot. 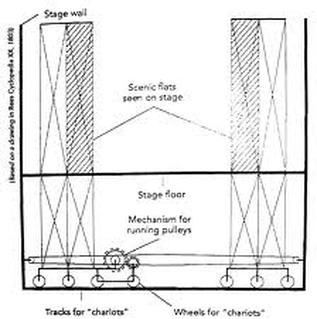 Giacomo Torelli, known as the Great Sorcerer for his spectacular scenic innovations, to design for the Palais Royal. Working at a theatre in Venice in the early 1640s, Torelli had already put together the first "chariot-and-pole" system for changing scenery. In brief, this system involves flats mounted on long poles, which pass through slots in the flooring to small. 2-wheeled wagons, or "chariots," that run on tracks under the stage. Through a series of ropes, pulleys,winches, and counterweights, all of the chariots under the stage perhaps as many as ten on both sides for each pair of five wings could be moved simultaneously. As one flat moved into view, the flat behind or in front of it, receded offstage. The counterweighted flats and drops were also linked to painted borders hanging from the flies. Turning the master winches to which they were all linked could effect a complete scenic transformation from one setting to another in an instant. Such machinery is still in use in Sweden's Drottingholm Theatre today , and such transformations are still astonishing. Productions also included special effects in perspectival miniature and the ascents and descents of deities supported by complex rigging.
This method of changing wings and back shutters was developed by Torelli. When a series of wheels and pulleys below the level of the stage-attached on frameworks to the scenery above—were shifted, the scene changed automatically. Because the mechanisms were interconnected, scene shifts could be smooth and simultaneous. 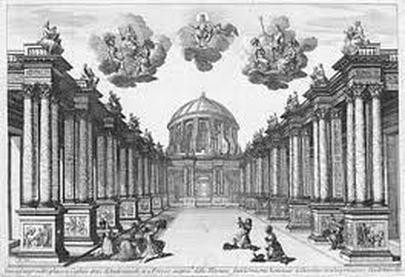