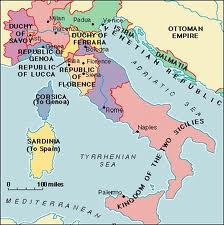 The Italian Renaissance gave birth to many innovations in theater architecture and scene design, including the proscenium arch stage, painted-flat wings and shutters, and Torelli's mechanized pole-and-chariot system. In addition, the Italian Renaissance saw the development of the neoclassical rules of dramatic structure, and of opera and Commedia dell'arte.
Around 1485, Italian rulers began to finance productions of Roman plays and imitations of them. This prompted interest in rewriting Roman plays into Italian as well as the writing of new plays. One of first important vernacular tragedy was Sofonisha by Giangiorgio Trissino. A chorus of 15 was used, in keeping with the number in the Roman choruses. Between the 14th and 16th centuries Renaissance drama developed in Italy, marking an end to medieval practices and a release of traditional Roman ways of presenting drama.

The neoclassical ideal was formed in Italy and spread throughout Europe. This ideal was characterized by an interest in literary theory and a desire to read and understand theoretical works such as Horace's Art of Poetry and Aristotle's Poetics. The neoclassical ideal demanded versimilitude which dealt with the strong appearance of truth. Because of versimilitude, fantasy and supernatural elements were avoided in neoclassical plays. The chorus and soliloquies were also discouraged. Reality was stressed in drama along with plays that teach moral lessons.

In Italy staging was made popular by using perspective architecture and painting. These methods gave audience members the illusion of distance and depth. Scenery and stages were raked or angled to increase the illusion and create a perspective setting. Books such as The Two Rules of Perspective Practice by Barozzi da Vignola and Nicola Sabbattini's Manual for Constructing Theatrical Scenes and Machines were guides for staging in Italy and the rest of Europe. Italians also came up with new methods of shifting scenery using wings and painted canvas coverings. The chariot and pole system of shifting scenery was created by Giacomo Torelli in 1641, and it was so popular it was used in other theatres throughout Europe.

The Italians were also interested in the architecture of the theatres themselves. The teatro olympico was built between 1580 and 1584 and was used for many productions. The teatro farnese at Parma was considered the prototype of the modern stage, and it boasted a large proscenium arch. The Italians and dance in most of their ceremonies, festivals, and theatrical presentations. Festivals were important and revived much of the lost spectacle of Roman times.

Commedia dell'arte was comedy of professional players. This was separate from amateur drama because of the high level of performances. Every aspect of the drama was top of the line from the scripts to the costumes. Two aspects of Commedia dell'arte were improvisation and stock characters. Some of the reason improvisation was so well done was because actors would play the same characters their whole lives. The strong reputations of the companies brought in huge audiences.This colorful and extremely theatrical art form is based on the interaction of traditional stock characters in improvised scenarios that facilitate a comic plot to arrive at a humorous climax. Commedia dell'arte (comedy of artists) originated in streets and market places of the early Italian Renaissance, although it's roots can be traced as far back as far as Ancient Greek and Roman Theatre. These Italian street performers, donning masks with exaggerated comic features to draw additional attention to themselves and complement their physical and acrobatic skills, eventually teamed up in troupes of actors often with a traveling stages to firmly establish commedia as a genre in it's own right by the mid-1500's. These "commedia troupes" performed for and were accessible to all. Language was no barrier, with their skillful mime, stereotyped stock characters, traditional lazzi's (signature stunts, gags and pranks), masks, broad physical gestures, improvised dialogue and clowning they became widely accepted wherever they traveled.In later years, the tradition spread all over Europe, eventually adopting a major French influence where many of the scenarios were scripted into commedia-style plays. The style and formula of commedia is now surviving well into the late 20th century and beyond continuing the tradition as an artistic institution where gifted actors create some of the most memorable, historic physical characters the theatre has ever seen. It is from the Commedia world where such characters as Arlechinno (Harlequin), Columbina, Pulcinella (Punch), The Doctor, The Captain and Pantalone emerged to reign in theatre for centuries. Actors, writers, composers,
The innovations of the Italian Renaissance in theatre architecture and scene design have been unmatched in theatre history.  For the next 200 years, anyone attending a theatre anywhere in Europe would be in a proscenium-arch playhouse watching the stage action from either the pit, a box, or a gallery.  The scenery would consist of painted-flat wings and shutters which could be shifted either by Torelli’s mechanized pole-and-chariots system or-like in England, the Netherlands and the United States-by stage hands who pulled them off in grooves.  The Italian Renaissance also produced Opera, Commedia dell’arte, and the neoclassical rules of dramatic structure.  Although this period left theatre no significant plays the rigid neoclassical rules help shape much of the drama presented world wide through the 18th Century.  Commedia dell’arte was highly popular until the 1700s and has influenced many playwrights, contemporary movements and theatrical experimentations.
Next page