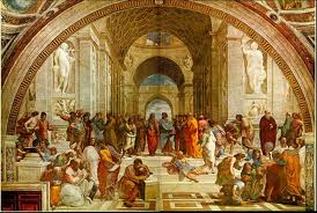 In the Renaissance, architecture was seen as the supreme art. Theorists on architecture believed that architectural design arose out of human experience, like all arts, but that it also represented the highest artistic achievement a human being could attain. Architecture, though, was not considered a specialist profession, as it is now. Architectural design was carried out by professional architects, painters, sculptors (such as Michelangelo), humanists, masons, and just plain amateurs with alot of time and money. 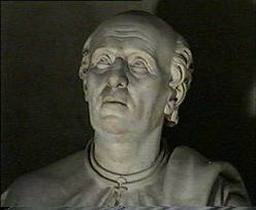 The invention of the uniquely Italian style in Renaissance architecture is typically given to Filippo Brunelleschi (1377-1466), who is also credited with inventing the principles of linear perspective in drawing and painting. In 1419, he was commissioned to build the dome over the cathedral in Florence, which had been started in 1296. In 1419, the building was still unfinished for no-one could quite figure out how to build the dome. Brunelleschi solved the problem by inventing a new type of dome. Rather than a hemisphere, Brunelleschi's dome is conical and high. It has eight sides and Brunelleschi built white ribs on the outside of the dome to call attention to these eight sides. 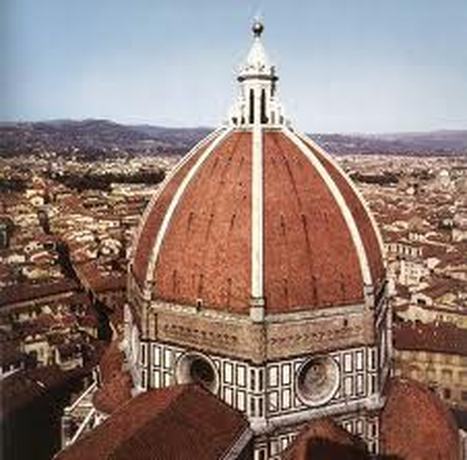 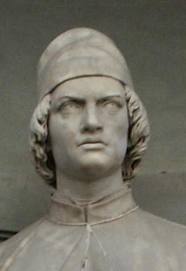 Besides Brunelleschi, the most important architect of the period was Leon Battista Alberti, who was also a significant political theorist and civic humanist. He's best known for his books on architecture; in these books, he draws up a theory of city planning and public space. His ideal city is filled with isolated, monumental buildings all perfectly balancing one another.While Brunelleschi is credited with inventing the architectural language of the Renaissance, Alberti is generally considered to have perfected it in terms of symmetry and disposition.
Alberti's two main architectural writings are "De Pictura" (1435), in which he emphatically declares the importance of painting as a base for architecture and "De Re Aedificatoria" (1450) his theoretical masterpiece. Like Vitruvius's "Ten Books on Architecture", "De Re Aedificatoria" was subdivided into ten books. Unlike Vitruvius's book, Alberti's told architects how buildings should be built, not how they were built. "De Re Aedificatoria" remained the classic treatise on architecture from the sixteenth century until the eighteenth century 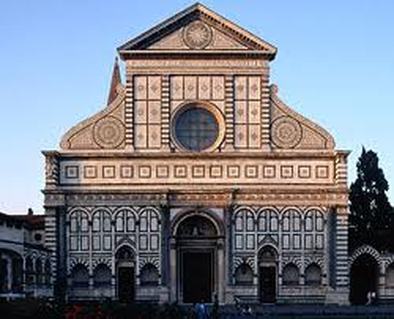 During the Italian Renaissance, art was everywhere. Patrons such as Florence’s Medici family sponsored projects large and small, and successful artists became celebrities in their own right.

Renaissance artists and architects applied many humanist principles to their work. For example, the architect Filippo Brunelleschi applied the elements of classical Roman architecture–shapes, columns and especially proportion–to his own buildings. The magnificent eight-sided dome he built at the Santa Maria del Fiore cathedral in Florence was an engineering triumph–it was 144 feet across, weighed 37,000 tons and had no buttresses to hold it up–as well as an aesthetic one.

Brunelleschi also devised a way to draw and paint using linear perspective. That is, he figured out how to paint from the perspective of the person looking at the painting, so that space would appear to recede into the frame. After the architect Leon Battista Alberti explained the principles behind linear perspective in his treatise Della Pittura (On Painting), it became one of the most noteworthy elements of almost all Renaissance painting. Later, many painters began to use a technique called chiaroscuro to create an illusion of three-dimensional space on a flat canvas